We have been receiving a quite a few calls about the new Tesla Solar roof as an option to traditional Solar PV panels.

Here is a great article by Steve Hanley on the CleanTechnica.com website that takes a really close look at the numbers.

Tesla has started accepting orders for its Solar Roof in California. Roll-out of the glass roof tiles with embedded solar cells to other US states will take place over the next 12 months. My wife and I are considering a rooftop solar system. We were told by a SolarCity representative on May 17 that the Tesla Solar Roof will not be available on the East Coast until 2018.

The company is making two styles of glass shingles — the flat glass and textured glass tiles — available first. The terra cotta and slate styles will not be available until next year, according to Tesla. There is no information available at present what the cost difference, if any, will be between the tiles available now and the tiles that will become available next year.

At the present time, anyone can access the Tesla website, plug in their home address and some basic information about the size of their monthly electric bill, and get an instant quote on the cost of a Solar Roof. The folks at PowerScout went to the Tesla Solar Roof estimator and plugged in numbers for a typical single family home in California with a 2,000 square foot roof and an average monthly utility bill of $150.

The calculator recommended that 40% of the roof be covered in glass tiles with embedded solar cells in order to produce enough electricity to offset the home’s normal energy usage.The balance of the roof would be covered with tiles that did not have solar cells embedded. It is impossible to tell the difference from the street, Elon Musk says.

The cost? $46,800 minus an estimated federal income tax credit of $10,100 for net cost of $36,700. Offsetting the monthly utility bill would save $1,800 a year, which means the payback period for the Solar Roof would be 20 years. That does not take into account interest paid on the loan needed to purchase the system or any increase in property tax that may occur.

What if the home owner decided to just add a rooftop solar system instead? PowerScout ran those numbers, too, and determined that it would take 19 solar panels producing 5.23 kW of electricity to offset a monthly bill of $150. With a typical rooftop system costing $3,250 per kilowatt, the traditional system pencils out at $17,000 minus a tax credit of $5,100. Net cost of the system would be $11,900 and the payback period would drop to about 6 years. Once again, there is no factor built in for financing costs or possible additions to property taxes.

Not everything is about money, of course. There are intangible benefits to the Solar Roof that are hard to put a price on. For one, it looks better from the street than a conventional rooftop system. For another, it comes with a 30-year warranty, but the company representative I spoke to suggested that there is really no upper limit on how long the glass tiles will last. Even if they stop producing electricity, they will still continue to function as a roof that protects the home from the elements for a long, long time.

* Asphalt Composite Shingle at an average installed price of $6 per sq.ft.

Continuing its analysis of the Tesla Solar Roof using the online calculator tool, PowerScout determined that the cost of the Solar Roof tiles without embedded solar cells is $11 per square foot, which is almost double the cost of asphalt shingles. The cost of the Solar Roof with solar cells works out to $42 per square foot. The cost of electricity generated is computed to be about $4.75 per watt, compared to an average of $3.25 per watt for a traditional rooftop solar installation. 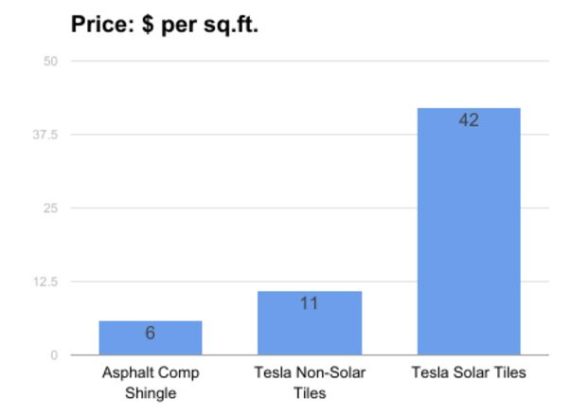 The Tesla Solar Roof comes at a premium price. Only an individual homeowner can decide whether the non-financial benefits of better aesthetics and a longer warranty make the extra cost worthwhile. PowerScout suggests that people with a relatively new roof may find the Solar Roof does not make sense from a strictly dollars and sense point of view. But that, as they say, is why they make Coke and Pepsi. People like choices and some may decide to value the intangible benefits more highly than others.

One factor that cannot be computed accurately is how much extra value a Tesla Solar Roof may add to the retail value of a home. Will others be willing to pay a premium for a home with a beautiful Solar Roof compared to the house around the corner without one? That is something that only years of comparable sales data will be able to answer, but the best guess is yes, the Tesla product will potentially add significant value to a home when the time comes to sell.

Note that none of these calculations takes into account the cost of adding a Tesla Powerwall residential storage battery to the Solar Roof or conventional rooftop solar system or  how that might affect the total cost of either system. PowerScout also makes this standard disclaimer: “It is worth noting that the above calculations, including payback are a function of the size of the roof, how much sunshine a roof gets and prevailing electricity rates.”